Settling back in her comfy chair, Freya opened her book and lost herself in its pages. Of all the places she’d visited since she’d moved to Willow Creek with her sister, she had decided that the library was definitely her favourite.

And yet her sanctuary was doing nothing to shake off her writer’s block. No matter how many books she browsed through, how many times she doodled in her notepad, how many blogs she read on the library’s computers (much superior to her own aged machine, another excuse to visit as often as she did), absolutely nothing was inspiring her.

So she’d given up, for now, and was re-reading all of her old favourites. Nothing new, nothing surprising, just comfort.

Two thirds of the way through Game of Groans for the fourth time, Freya was utterly absorbed in the familiar storyline.

Utterly absorbed until a frustrated voice pierced the quiet bustle of the library.

Freya looked up from her book to see an embarrassed young man hurriedly apologising to her fellow library-goers, his cheeks reddening as he realised what had just happened. Shaking his head, he caught Freya’s eye.

‘Everything okay?’ Freya mouthed, not wanting to draw attention to herself as well.

‘My game,’ the man mouthed back, gesticulating at his computer screen.

‘What game?’ Freya whispered as she crept over, slipping a bookmark into Game of Groans.

‘Humans. Ever played it? I just got burgled! I didn’t know that could happen? How do you stop it?’ The man muttered animatedly, un-pausing the game and letting the dastardly character rob his family.

Freya stared at him incredulously. ‘You’re new to the game, I take it?’ she asked quietly.

Nodding her head, Freya thought back to all the nights she’d spent playing the game after dropping out of university. ‘A little. If you go into Buy Mode there’s an alarm that’ll bring the cops in. It’s a bit expensive but worth it!’ 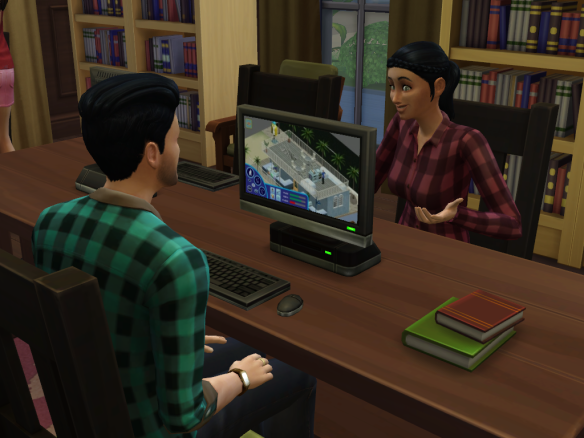 ‘Of course!’ The man exclaimed in exasperation, briefly forgetting to keep his voice down. Raising a hand in apology, he resumed his hushed tones. ‘Thank you so much! This is the third time it’s happened to me today!’

Freya grinned a little, in spite of her naturally gloomy nature. ‘You have? I do spend a lot of time here, I’ll admit. I just love books, really,’ she tailed off, stopping herself before she launched into a (usually one-sided) conversation about her favourite authors.

‘Well, you’re in the right place for that hobby then!’ Aidan beamed. ‘I always see you curled up in that chair over there, reading a different book every time. You must get through a lot of them!’

‘I guess so,’ Freya shrugged, feeling a little self conscious. ‘I, er, I can’t say I’ve ever seen you before here though?’

‘Oh.’ Aidan’s shoulders fell a little. ‘I’m not surprised, to be honest. You always seem so lost in whatever it is you’re reading. I was astounded that my little outburst earlier caught your attention!’

‘Well it is the fourth time I’ve read this one, I don’t need to concentrate on it so much,’ Freya teased.

Aidan’s eyes twinkled back at her. ‘Well, I’m hoping this won’t be the last time you notice me, Freya! Thank you for helping with my game, but I’ve got to get to work now. See you around some time, I hope?’ Smiling tentatively as he met her eyes, Aidan waved as he got up and walked out.

Looking after him, Freya’s mind was whirring. What had he meant by that?! 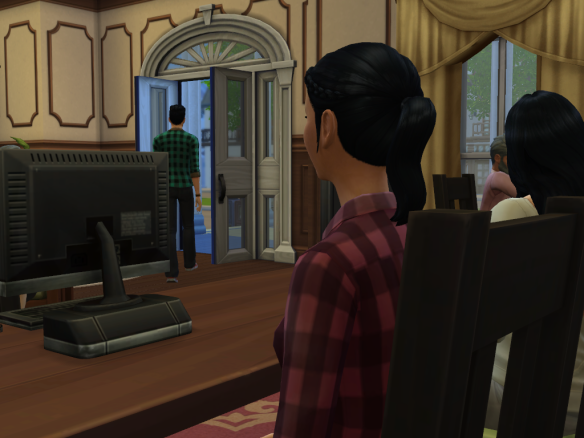 ‘Freya! Hi! How was the library?’ Lily no longer needed to ask where her sister was spending her time when she wasn’t either at home or at work. There was nowhere else. ‘Read any good books lately?’ she joked with her twin.

‘Yeah, I did! Game of Groans again!’ Freya replied with an uncharacteristic brightness to her voice.

‘Again? Isn’t that, like, the fifteenth time you’ve read that one?’

‘Fourth. But it’s so good Lil, you really have to read it!’

‘I don’t have time to read, Freya! May I ask a question?’

‘Why are you this happy over a book you’ve read four times?’

Freya froze. ‘I’m just, er, it’s my favourite, you know?’ she replied hurriedly. ‘How was work? How was the gym?’ she changed the subject faster than Lily’s speed on the treadmill earlier that morning.

‘Work was tiring. The gym was… Interesting, to say the least. What do you want for tea?’ This time it was Lily’s turn to change the top of conversation, her cheeks flushing as a now-familiar voice echoed through her mind as it had done all day…