Yawning, Freya stabbed idly at the keys on her aged computer’s keyboard. She was barely looking at the screen, not that she had to – she was hardly going to submit any of the gobbledygook her fingers were producing today.

…And all this week…

…Since she dropped out of university, actually…

Freya sighed, leaning her head wearily against the computer screen. Even her nonsense was lacking inspiration now.

What if I’ve run out of words?! No Freya, don’t be silly. It’s just writer’s block. It’ll pass. You’re a published author, for gnomes’ sake!!

Admitting defeat, for now, she pressed the delete button until the page was clear, her eyes watering a little with frustration. An empty page to match her empty head. Maybe an idea would finally come to her over lunch…

Still staring at her blank screen, Freya barely noticed as Lily wandered in, her customary mug of morning coffee in her hand. As active as she was, Lily was definitely not a morning person. You’d have more luck reasoning with a transformed weresim than with Lily pre-caffeine first thing in a morning. Oblivious to Freya’s obvious angst, she took a noisy slurp before opening her cheery mouth.

‘Knocking out the next blockbuster, hey sis?’

‘No time to write again? Awh, Freya! Your boss still giving you all that proof reading to do?’

Taking a sideways glance at the stack of papers on her dresser, Freya’s heart sank a little. The dreaded proof reading, the bane of her oh-so-exciting life these days. Sullenly, she nodded.

Lily tutted sympathetically. ‘Oh, Freya. I wish you’d tell me why you dropped out of uni. You were doing so well! Your tutor even said you were on course for a first class with honours, and with contacts like his you could’ve gotten a better jo-‘ ‘Lily, stop,’ Freya snapped, her tone a little harsher than she had intended. ‘We’ve been through this. I’ve told you why I dropped out. I want to be a writer. A degree in communications is not essential for that career.’

‘But it would surely help!’

‘I don’t really care what you believe, Lil. You’ve taken your path, I’m taking mine.’

‘Then why aren’t you happier about it! Have you even spoken to anyone you met at uni since you left?! What about Leo? He was your best -‘ 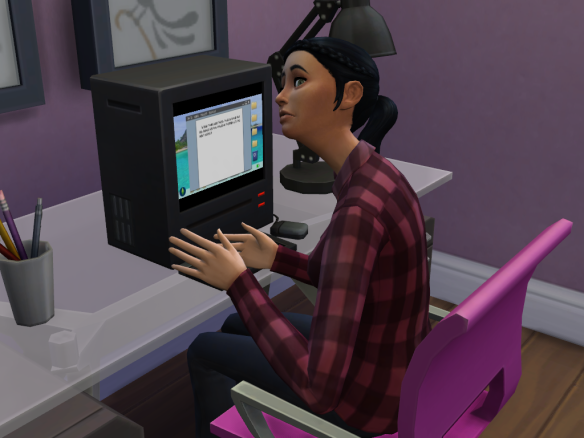 ‘He was your best friend! Why haven’t you spoken to him since you left?’

‘I have,’ Freya lied smoothly, yet unable to look her twin directly in the face.

‘Why does it matter when!’

‘Look, we just weren’t that close in the end. These things happen. I’m fine. I’m happy!’

‘You know I don’t believe you, Freya…’

‘Well I wish you’d start! I’m fine, honestly. Once I’ve shaken this bloody writer’s block I’ll be in for a promotion, I’m sure. But I’m fine. Honestly.’

‘Because he was your best friend!’

‘Drop it Lily!! For gnomes’ sake! The rest of this inquisition can wait, I’m off to get baking for Mum and Dad’s party, they’ll be here in a couple of hours. Don’t you have some training to do, Ms. Superstar Intern at the Space Agency?’ Avoiding her sister’s anxious gaze, Freya angrily turned the old computer off and stormed out of her room to the kitchen.

Lily watched her go, her gradually cooling coffee cup clutched in her shaking hands. Something was wrong with her sister, that much was clear. She just wished she’d let her back in.

‘Oh Lily, it sounds like you’re doing so well for yourself! I couldn’t believe it when Dylan rang to tell me, a first class degree with honours and chosen from 250 applicants to intern at the Space Agency?! We’re all so proud of you!’ Robyn beamed at her niece, delighted with her achievements. Robyn, along with Booker and Mara, had come across from Bridgeport for the day to celebrate her brother and sister-in-law’s birthdays.

‘Thanks Aunty Robbie,’ Lily grinned back, feeling a little smug. ‘I’m still coming to terms with it, too! Me, in space one day! Whoever would have thought it?!’

‘Well it sounds like you deserve it Lily, you’ve clearly worked very hard,’ Booker grinned, as Lily felt a little tug on her sweater sleeve.’

‘Aunty Lily… What happens if you meet an alien?’ Mara asked quietly, her little face inquisitive.

Lily laughed, gently so as not to hurt her niece’s feelings. ‘I doubt I’ll meet any aliens Mara, I don’t think they live in the parts of space we can get to yet!’

Mara narrowed her eyes as her Aunt turned back to speak to her parents. She wasn’t so sure…

Sneaking off to use the computer (surely she’d find some evidence of aliens living closer than her supposedly-clever Aunty Lily thought on Simpedia…), Mara’s seat was quickly taken by Dylan. ‘How are you doing, love?’

‘Fine thanks, Dad. Happy birthday, by the way! Did you like mine and Freya’s present?’

‘Of course I did! But you know, you really didn’t need to get us anything. I did say! I know that money’s a bit tight at the moment for you girls…’ 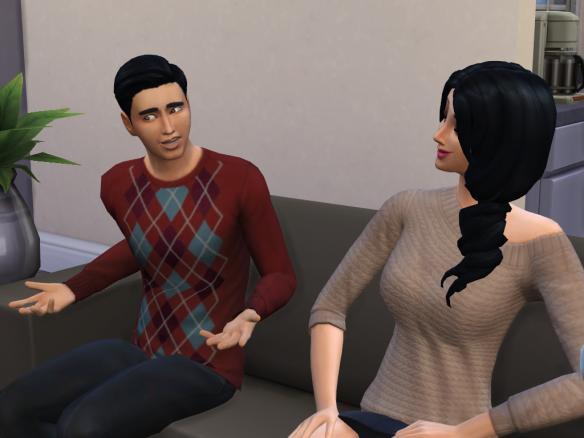 Dylan sighed. ‘I’m guessing that Freya’s not thinking about returning to complete her course, then? She would have strolled straight into a much better job than the one she’s settled for now, and you girls would have a much nicer place to live in, not that you haven’t made this place your own, mind.’

‘Tell me about it,’ Lily said pensively, playing with her hair. ‘I even offered to buy her a new computer last week, that old piece of junk she’s using is hardly fit for purpose. She just…. She’s too proud for handouts or gifts or whatever you want to call them. And I don’t think she’s handling the fact that I earn so much more than she does very well.’

‘Has she told you why she dropped out yet?’

‘Nope. Not through lack of trying though…’

‘Well, she’ll tell us when she’s ready. I know this won’t hold her back in the long run, but it… It’s just so hard, seeing one of your babies struggling so,’ Dylan said sadly.

Freya cursed as the second batch of cake mixture splashed all over her, forgetting for a second that there was a child in the house. She knew was coming now.

‘Everything alright, love?’ Louise enquired, popping her head through to the kitchen. Before Freya could make anything up and return to her gloomy solitude, she’d already settled herself at the table. ‘From the expression on your face, that’ll be a no then?’

‘I’m fine, Mum. I just knocked the bowl a bit. Don’t worry, your cake is in safe hands!’

‘You know I’m not worried about the cake. I know you’ll do a cracking job of those! It’s you I’m worried about.’

Freya exhaled loudly. This. Again. ‘Mum, you know you don’t have -‘

‘Yes, I do. Because you’re my daughter.’ Turning to look at her mother, Freya was surprised to see a glimmer of a smile on her face. ‘Why is worrying something to laugh about, then?’ she replied moodily, pouring the uncooperative cake mixture into a baking tin.

‘What’s crying going to accomplish? Anyway, I’m clearly not smiling about that. I can just see so much of your father in you, Freya.’

Louise chuckled to herself. ‘Oh, he just never understood why his mother would worry so about him either. The fuss he kicked up when she wasn’t happy about him joining the fire brigade back in Bridgeport! She told me all about it, I was in stitches for days…’

Freya frowned. ‘But she was right to worry, wasn’t she? After that fire he was in… I mean, what’s going to happen to me? A few paper cuts?’

‘Oh don’t cause me any more stress Freya. What if they go sceptic? What if you sever an artery?! What if -‘

‘Okay, I’ve made my point! But that is just my point. I know something’s the matter, call it mother’s intuition, but I’m not going to pry any further. You’ll come to me when you’re ready, and I’ll be waiting. But please, Freya, let people help you. We’re all here for you, you know.’

It felt like a weight had been lifted from the young girl’s shoulders as she walked across the small kitchen and enveloped her mother in a hug.

‘Thanks Mum. I do appreciate that. But seriously, I will… I am fine!’