As it transpired it didn’t matter whether the girls’ competitive edges would affect their university performance; the pair opted for different majors in the end. Already at a head start with her writing skills, Freya decided to pursue a degree in Communications, while Lily surprised everyone by electing for Physical Education. ‘I’ve had years of being stuck in classrooms,’ she shrugged when questioned on her choice. ‘I love being active and getting outside, at least this way I can get a degree without being cooped up in some stuffy old lecture theatre for hours at a time!’

Upon their arrival at Henry Hall, the accommodation the twins had been assigned to, Dylan and Louise had said a teary goodbye before departing swiftly at the girls’ request – both had agreed that it would be better to get stuck in straight away rather than have a drawn out farewell. After being given their room numbers, they’d lugged their heavy cases (‘For gnomes sake, Freya, how many bloody books do you need for this bloody course?!’) to their respective rooms and started to unpack. Lily had barely finished when her MultiTab 6000 – a present from her parents for getting into university – buzzed to let her know she had a new e-mail. Opening the attachment, she smiled at the picture before Freya burst in through her door, a little out of breath. 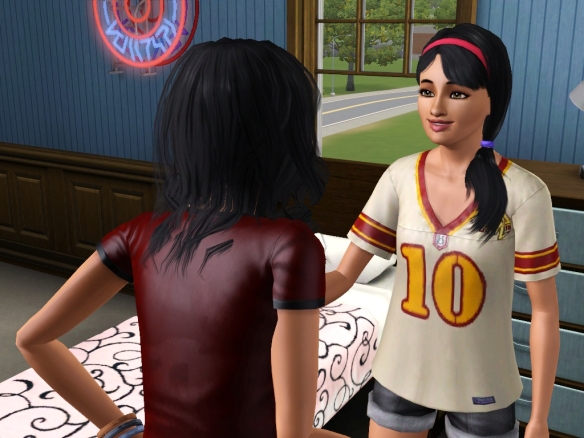 ‘Freya! Have you seen it? They sent it to you, too! I can’t believe Aunty Robyn had her baby the day we left! Typical!’ 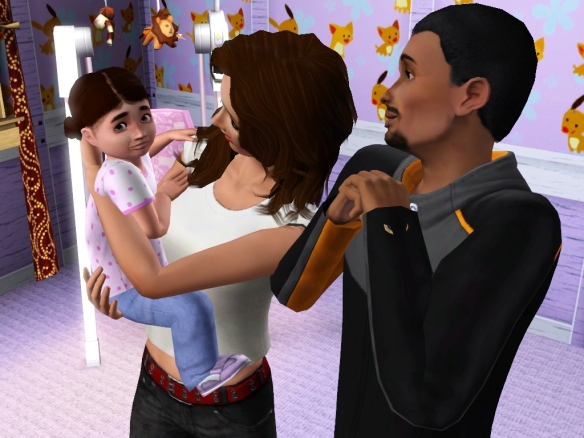 Robyn and Booker had finally had their first child after a couple of fruitless years. Mara Singleton had popped into the world just too late to meet her student cousins! ‘It’s going to be ages before we get to see her!’ Lily sighed. ‘She’d better keep us up to date with… Oh, what Freya? What’s wrong?’ 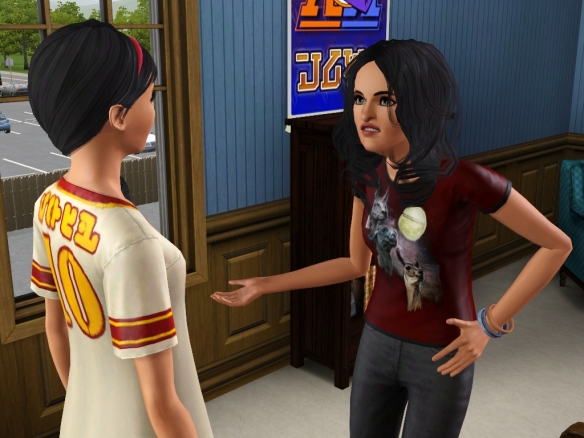 Lily suppressed a smirk at her twin’s exaggeration… At least, she hoped she was exaggerating! ‘Oh yeah? What’s she like?’

‘Pink! Seriously, she’s doing my head in already! I walked into our room and she’d already decorated all of it and put her stuff everywhere! Lace, Lily! Lace curtains! Lace lampshades!! Lace tablecloths!!’

‘But I want my things, Lil! At least some of them! We seriously couldn’t be more different. I may actually murder her. Where’s your roommate, anyway? They’re pushing it a bit… Hang on…’ 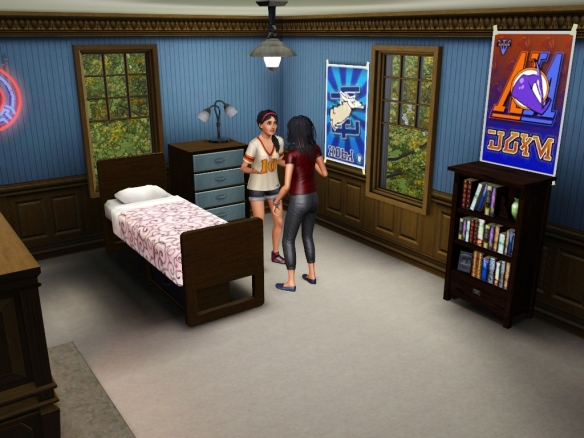 Lily grinned as Freya surveyed the room, getting ready for outburst number two. 3…2…1…

‘Wondered how long it’d take you to notice!’

‘You have got to be kidding me, Lily!’

‘Aw, c’mon Lily! You’d get on far better with her than I ever will!’ Freya pleaded, knowing full well her sister wouldn’t budge. And she didn’t blame her… Who in their right mind would give up a private dorm room?!

Chuckling, Lily linked arms with Freya companionably. ‘In your dreams, twinny! I’ll come and meet her though, see just how much you’re exaggerating. Not that you’re renowned for that sort of thing, or anything,’ she winked.

Freya hadn’t been far off the mark by describing her roommate as ‘pink’. Lizzie was just that, pretty much – Lily was reminded of the Simbie dolls she used to play with when she was a child as she took in the girl’s bright blonde hair and pink attire. Eyes widening, Lizzie looked surprised to see her roommate’s double.

‘Oh, gosh! Wow! Freya, you didn’t tell me you were a twin!’ Lizzie spoke with a mildly affected accent; Lily wondered whether she had grown up in a boarding or private school.

‘Well I would’ve done if you’d let me get a word in edgeways,’ Freya grumbled in her sister’s ear; Lily held back a grin.

‘Phys Ed? Oh wow, me too! I was captain of three of the sports teams back at Smuggsworth, what do you play?’ 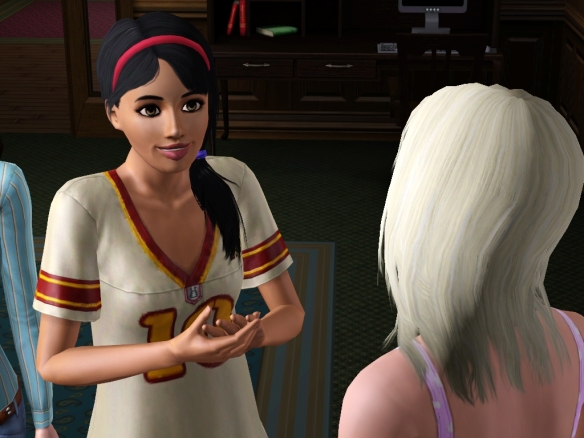 Over the moon to find someone on the same course as she was, Lily delved into conversation with Lizzie before the two dashed off to change into their gym gear and shoot some hoops together – the Halls had a basketball net installed on the side of the building. 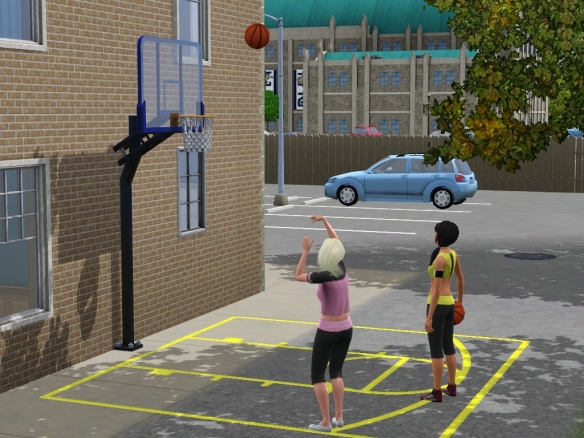 Freya watched them go gratefully – the crafty girl had known all along that Lizzie was on Lily’s course, and had hoped they would hit it off. Lizzie reminded her of Lily’s friend Bianca from school… She hadn’t really liked her all that much either, come to think of it. The two sisters really were very different people. Now, all you two have to do is bond over basketball, become best friends, and then Lily will be begging me to swap with her!’ Freya grinned to herself.

Wandering from the Halls’ library through into the lounge, browsing the titles of the books that were on offer, something different caught Freya’s eye. The games console! ‘Awesome!’ she exclaimed to herself, selecting a game and settling down to play for a while whilst everyone else was busy unpacking. 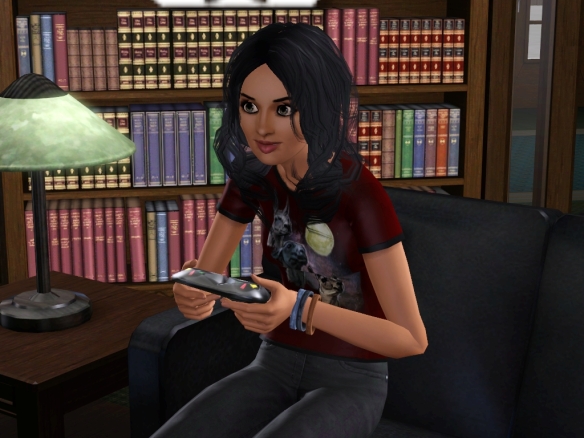 As it happened, she’d only been playing for around twenty minutes when she felt a presence in the room with her. ‘Awesome!’ she heard a male voice cry out delightedly in the same tone she’d used. ‘I’ve been wanting to play this for ages! Mind if I join you?’

‘Sure,’ Freya said absent-mindedly, not taking her eyes off the screen. She barely noticed the guy as he chased round the sofa and sat cross-legged at her feet. It wasn’t long before they were both deeply engrossed in the game, teamed up to fight against the evil Doctor Llamatron in the game’s first boss level. 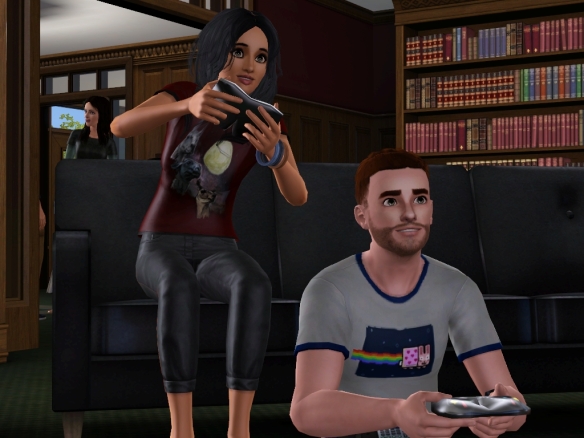 ‘Go on! Pen him in that corner and I’ll use my sword!’

The gamers cheered as they successfully defeated their virtual nemesis, high-fiving one another. ‘We make a great team, er… Sorry, I don’t know your name,’ the boy realised sheepishly.

Freya looked at him properly for the first time. Ooo… 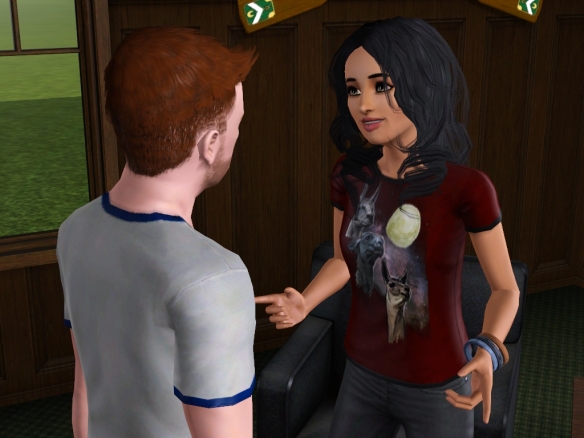 ‘I’m Leo,’ he replied grinning. ‘Nice to meet you Freya! Not doing Communications are you, by any chance?’

Freya’s heart leapt. ‘I am, actually!’

‘You’re joking?’ Leo laughed. ‘I actually can’t believe it! Studying Communications and a fan of Llama Revenge Attack V? You must be a girl of taste!’

In the weeks that followed, Freya and Leo became firm friends. The two had far more in common than a mere degree choice, and it turned out that Leo had even read Freya’s book! ‘I bought it to read with my sister,’ he explained, ‘but I really enjoyed it! Why are you on this course if you’re already a published writer, hey?’

When they weren’t busy playing video games or browsing around Keith’s Komics, the pair would usually be found studying together. Noses buried deep in their respective textbooks, the two friends would sit for hours in friendly silence, broken only to ask for a clarification on a particularly difficult passage or for a highlighter.

‘How are my favourite nerds doing today, then?’ She asked affectionately as she strolled into the room, her voice muffled by the protein bar she was stuffing down her face. The sisters hadn’t spent a great deal of time together since lessons started; while she didn’t have many classes per say, Lily could usually be found at the gym, on the sports field, or hanging out at bonfire parties with other people from her course and from the various sports teams she was now a part of. None of that was particularly Freya’s scene, obviously! 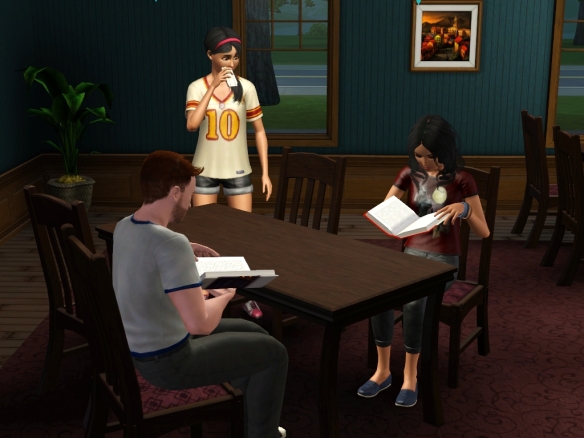 ‘One sec, Lil,’ Freya said as she concentrated on the paragraph she was reading. ‘There! How you doing, sis?’

‘Great thanks! Only got a few minutes, off to lacrosse practice with Lizzie at quarter to.’ Much to Freya’s annoyance the two girls had become really good friends, but Lily was still hanging onto her private room! ‘How’s the radio show going? Still blocking up the car park twice a week?’ She winked, grinning at the two. 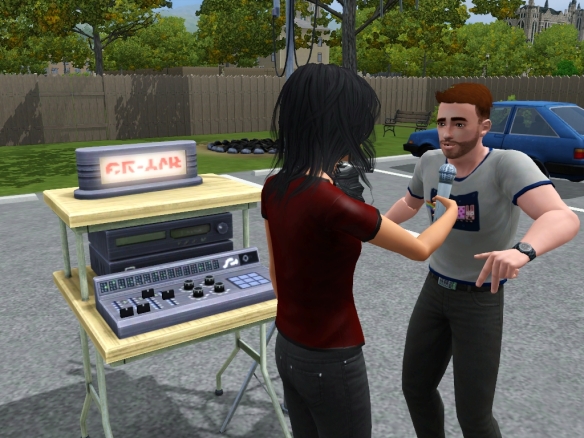 For extra credit Freya and Leo had started up their own show on the campus’ radio station, twice a week for two hours, after they’d been given a mobile radio station to toy with as part of one of their modules. Unfortunately the best signal they’d found happened to be in the middle of the Halls’ car park, resulting in a fair few on-air apologies for bad language as the microphone picked up the loud curses aimed their way from angry drivers!

‘Not so bad, thanks! We actually got over -‘

‘Oops, sorry Freya! Gotta dash, tell me later yeah?’ Freya rolled her eyes as her athletic sister sprinted out of the room. She was just so busy these days!