How does Simspeare present dramatic irony in this passage from…

Sighing, Freya massaged her aching forehead with her knuckles as she resisted the urge to scribble over her homework sheet, scrumple it up, and throw it across the room. Somehow she felt that her teacher wouldn’t appreciate her work being handed in in that state again.

Scribbling down a few words, she read them back and rubbed them out, scowling. She didn’t care.

She just did not care.

It wasn’t the reading, it wasn’t the books. It was never the books themselves. She loved them with a fiery passion, and had already read the whole year’s syllabus three times. Freya adored Simspeare’s plays, marvelling at the flow of each character’s speech and eagerly deciphering the ye Olde Simlish language, amazed at how many words the playwright had simply made up on the spot to fit in with the rhythm of the lines.

She loved the books. She just hated the learning. All the ‘between the lines’ and ‘what the author really meant to say in this paragraph’ nonsense. The author meant what they were saying, for gnomes sake! The blue curtains are just blue curtains, they don’t represent melancholy!

Groaning, she tucked her homework sheet back into her school bag and flopped down on her bed, admitting defeat. She could make something up on the bus tomorrow. All she wanted to do was to get back into Murder In Pleasantview. Pulling the book out from under her pillow, she made herself comfortable and turned on her CD player. 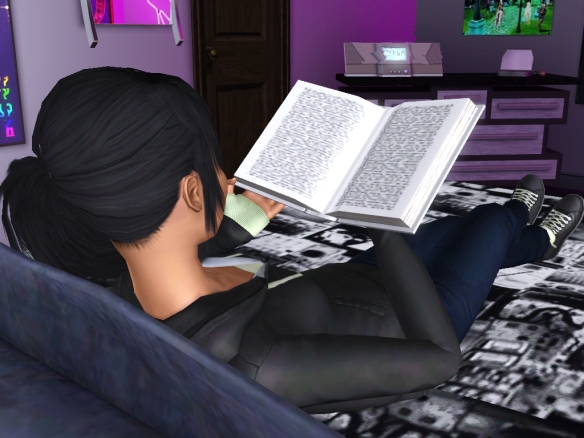 This was her world, and no-one could reach her in it. No-one could get to her, drag her out… Freya heard laughter coming from the other side of the far bedroom wall. Her brow furrowed; she picked up the stereo remote and turned the volume up another few notches.

There. No-one could get at her now.

‘For gnomes sake, all this Simspeare stuff is so boring! Give me a car magazine any day of the week!’ Finlay exclaimed as he and Lily poured over their homework together, sat cosily on the rug on her bedroom floor. Lily laughed, adjusting her hat a little.

‘You’re not wrong there! I totally don’t get why we can’t do something a bit more modern. Something written in a language we can understand!’ 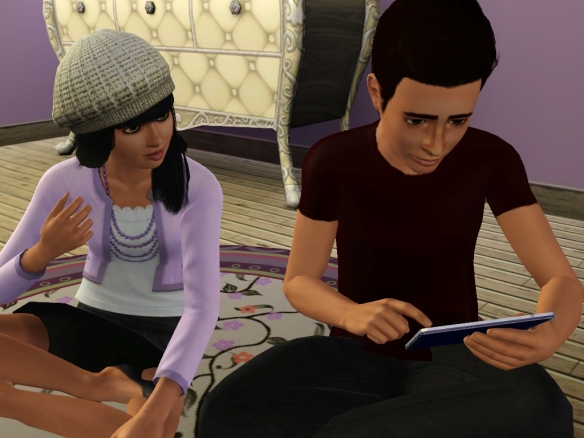 ‘Too right!’ Finlay grinned back at his friend, and Lily felt her cheeks glow a little, suddenly aware of how close she was sat to him.

He smells amazing… Oh stop it Lily, don’t be so pathetic!! You’re friends! Nothing else!

‘So do you think we’ll… Oh, so it begins!’ Finlay rolled his eyes as a thumping bassline suddenly started reverberating through the walls; the necklaces hung from Lily’s mirror started jingling as the force of the music shook them. ‘Hm, only just gone four o’clock. She’s given up earlier today,’ he said as he checked the time on his phone.

Gazing at the wall separating her from her twin, Lily felt a wave of sadness sweep over her. ‘I know. I don’t know what’s happened to her. She just seems so… Lost…’

‘Yes, well, if you’re going to be a complete bitch to everyone who comes your way you’re never going to have anyone to bring you back again when you scoot off the rails. I’m sorry Lily, I know she’s your sister…’ 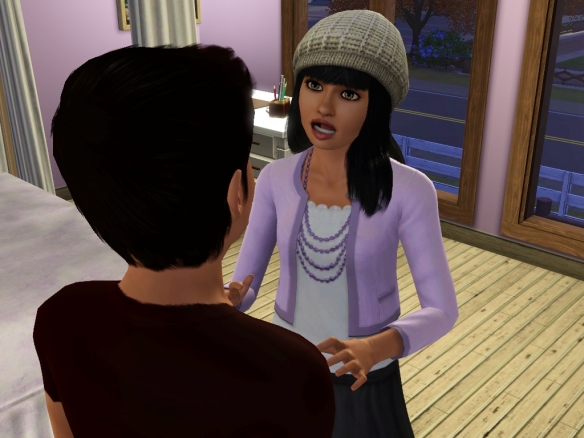 ‘No, no, I agree with you. She is a bitch. It’s just hard, you know? Everyone expects twins to be close, but we’re just complete opposites…’ Lily trailed off, feeling inexplicably traitorous.

‘I know what you mean. Look, we’re never going to concentrate on this here. Want to go out to the park or something?’

‘Yeah, sure! I’ll just ask my Mum first, check it’s okay. You know she worries after Freya stayed out too late that time.’

‘For gnomes sake, your sister ruins everything!’

‘Tell me about it! It’ll be fine though. We can finish this on the bus tomorrow!’ 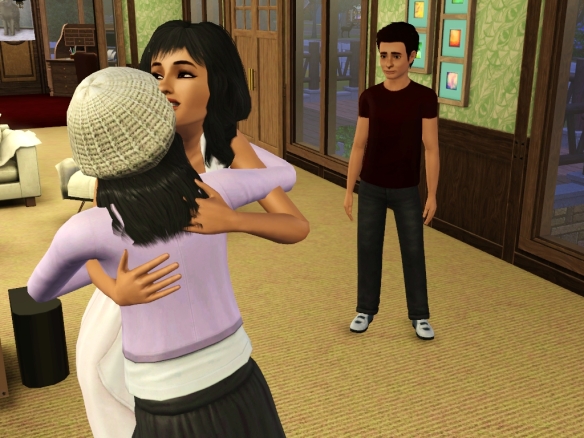 ‘Of course you can go out dear, the park’s only just down the road! Just please don’t be late home, you know I worry about you -‘

‘I know, Mum! I’ll be back half an hour before curfew, I promise.’

As Louise waved her youngest twin and her friend off from the front porch, no-one noticed the lone figure stood watching from her bedroom window, bathed in the magenta light from her wall lamp over her desk. 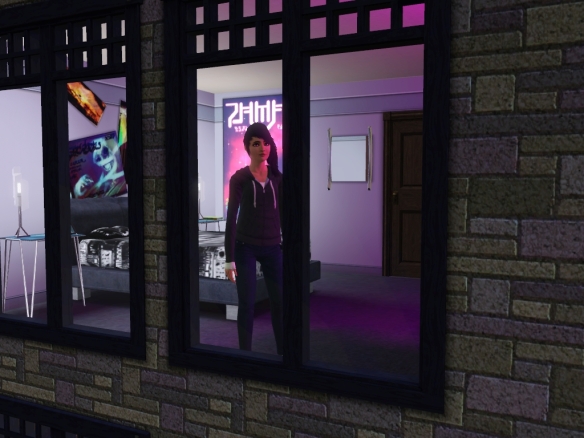 It’s funny, the things you hear during a CD change.

‘…So basically, she used the whole “I forgot my phone and didn’t know the time and couldn’t call” excuse, and then her phone rang from her pocket!’ Lily laughed as she recounted the tale of Freya being brought home in a police car a couple of months previously. Finlay creased up laughed. 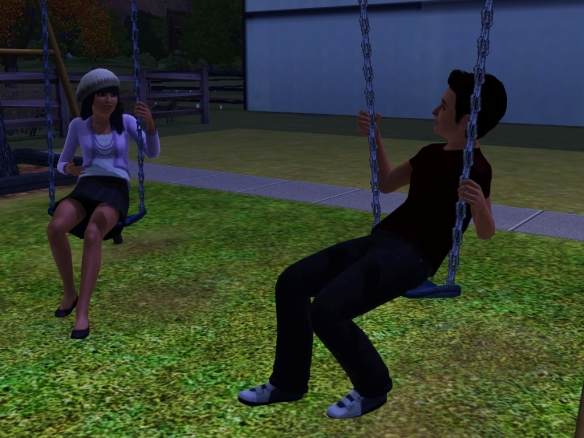 ‘Ah, rookie mistake that! Where had she even been all that time?!’

‘That was puzzling me too! I mean, she doesn’t really have anyone to hang out with any more and it’s not like you can wander around on your own all night. Anyway, Mum snatched her phone from her and answered it. It was the woman from the library.’

‘Yeah, Freya had left her library card. Turned out she’d been in there all night! The librarian hadn’t seen her, she’d tucked herself away somewhere and she didn’t realise she was there until she was filing back the returned books.’

‘The library. Gnomes, what a loser! No wonder she hasn’t got any friends! I can’t believe how different you two are, Lily. You’re definitely the good twin.’ Finlay’s eye twinkled as he grinned at his friend.

‘So… got a date for the prom yet, Fin?’ Lily asked nonchalantly. ‘Rumour has it you’re asking that red head from your sociology class?’ Neither of the pair were particularly high up the popularity ladder, but as the biggest event on the school’s calendar approached everyone spoke about everyone.

‘No, no-one’s asked me. I was just going to go in a girly group with Bianca and Chanterelle.’

‘Well, how about we go together?’

‘…What?!’ Lily’s heart leapt several metres into the air.

‘Well why not? We already know each other and we’ll have a great time. Half that lot who’re going with dates don’t know the first thing about the person they’re going with. But we already have fun together. Come on, it’ll be a laugh!’

‘Are you being serious?!’

‘Yes! Go on Lily, be my prom date! I’ll get you one of those flowery things too, the whole shebang!’

‘Right! That’s that sorted then. No need to worry any more! Ooo…’ Finlay jumped as his phone’s alarm rang out from his pocket. ‘That’s our forty five minute warning! Come on prom date, I’ll do the gentlemanly thing and walk you home.’

As Finlay’s back turned, Lily let out a silent cheer. 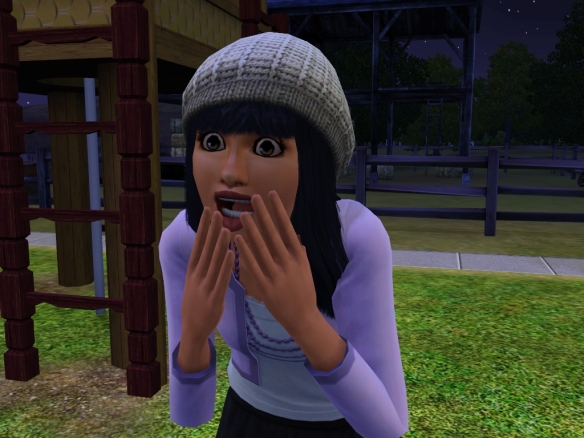 Finlay had just asked her to the prom. Finlay! The boy who’d been her best friend for five years, the boy she’d been hopelessly in love with for four. The boy who jumped to her defence from his fort in the tree tops all those years ago.