Carefully applying a final slick of lip gloss in the car’s mirror, Ivy worriedly smoothed her fringe and straightened her skirt. She could hardly keep still.

‘Ivy, shush!’ Ethan quickly placed a calming hand on his wife’s, trying to multitask driving with soothing Ivy’s fraying nerves. ‘We’d know if he wasn’t happy. He writes to us twice a week and you’re constantly on the phone to him. He’s fine!’

As Ethan turned his attention back to the traffic they were closing in on, Ivy sighed. ‘You’re right. I know you’re right. I just worry about him! He’s my little boy!’

‘I know you do, sweetheart, it’s only natural. I do too! But we both know that he’s fine. Even if he’s not, of which there is no chance, his teacher’ll let us know.’

Ivy smiled over at her husband. The pair were driving up to Fort Starch for a first meeting with Dylan’s teacher. He’d been at boarding school for nearly a year now, and as this was his final year before moving into High School they were there to discuss whether or not he would be continuing his studies away from home.

The school appeared on the horizon, a modern building with black and grey bricks, adorned with rows of pink flowers and a long grey fence enclosing the school’s exercise yard. Ivy pressed her face against the window, marvelling at it.

‘Y’know, it doesn’t look like a school at all, does it? It looks magnificent!’

Ethan laughed. ‘You said that when we dropped Dylan off here last year!’

Ethan parked up and they got out of the car. Ivy walked around to the front of the school, gazing up through the windows, before turning to face Ethan. ‘Well? Do I look okay to meet Dylan’s scary army teacher?’

Grinning, Ethan looked Ivy up and down. ‘Ah, you’ll do! Okay, okay!’ He quickly fended off Ivy’s mock-barrage of fists, laughing. ‘You look gorgeous, Ivy. But his teacher won’t be scary!’

‘Sergants aren’t scary, Ivy! He was perfectly nice when I spoke to him on the phone last week. Don’t be nervous.’ Nodding, he took Ivy by the hand and led her through the double doors into the same plush entrance hall they’d led Dylan into the year before. Letting the receptionist know they’d arrived, they settled down onto the dark wooden chairs.

‘Do you think he’ll have changed at all, Ethan?’

Ethan looked at his wife hesitantly. ‘Maybe. He’s been gone nearly a year, after all. Hah, maybe with all the extra physical education they get here he’ll have grown a six pack!’

‘And he still is, Ivy! He always will be, for me as well as you. Even after his next birthday when he’ll be all grown up!’

‘Oh, don’t!’ Ivy had been going to continue when the door opened next to where they were sat, and a well built man in combat trousers strolled through.

Ethan leapt up and shook the teacher’s hand. ‘Hello, so pleased to meet you! Please, Ethan and Ivy.’

Mr. McGarty smiled warmly. ‘In that case, call me Andrew! Would you like to come this way, please?’ He walked back through the door he’d just come through, into one of the school’s classrooms. Ivy and Ethan sat tentatively down at a desk, feeling oddly as if they were back at school themselves. 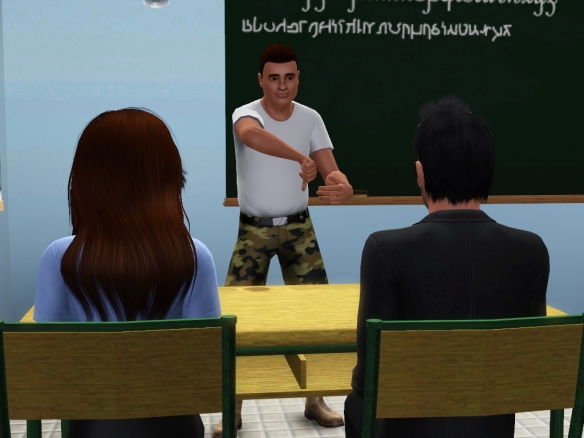 ‘Well, what can I say about Dylan? Frankly, he’s a pleasure to teach. So attentive, he concentrates, he’s a good influence on those around him. You’ll know that he’s been receiving steady As since his arrival, the occasional B+ but hardly anything to worry about. His fitness levels are good and he competed in the swimming team last month, helping the team to bring back a silver medal in the competitions. Dylan’s lap time around our race track is… Let me see… Two minutes forty-five, which is more than satisfactory. In general he’s just a really good kid, keeps out of trouble, he’s made plenty of friends, clean, tidy, polite. You’ve raised a good child, you two!’

Andrew beamed at Ethan and Ivy, who were sat a little stunned.

‘Pranks?’ A confused look flitted across the teacher’s face. ‘No, none at all. Well, none that I know of.’

‘…Okay… Well, I’ll go fetch Dylan. He’ll be in his dorm at the moment, his year has this afternoon off.’ A bewildered Mr. McGarty exited the classroom, scratching his head. That was the strangest reaction to a glowing report he’d ever had! Ethan and Ivy looked at one another. 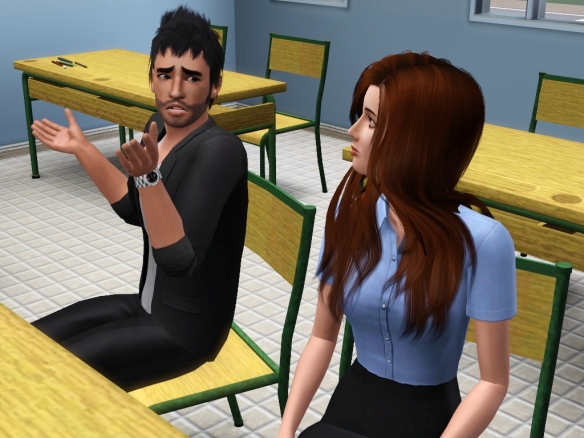 ‘Looks like sending him here’s done the trick?’ Ethan shrugged. ‘Maybe this was what he needed. We’ve done the right thing, Ivy. And heck, two minutes forty-five around that track? Andy never got below two fifty and was always bragging about it!’

Ivy and Ethan got up from their seats as their son hurtled into the room, flinging his arms around Ivy.

‘Now then, young man! We’ve been hearing great things about you!’

‘Really?!’ Dylan’s face lit up and he bounced from foot to foot excitedly. ‘Was the Sergant nice about me?’

Dylan grinned. ‘I was the second fastest in my year, Dad!’

‘Well, we’re very proud of you,’ said Ivy jovially. ‘And no pranks, we’re pleased to hear!’

An odd look passed over Dylan’s face for a split second. ‘No. None at all. So, where’s Robbie?’

‘We told you, Robyn had to stay home with Uncle Tristan. We couldn’t take her out of school. You’ll be seeing her soon anyway Dyl, what with the holidays coming up.  She sends her love. You don’t need to worry, my dear, she’s in good hands!’

‘You can’t go much higher! You’ll go right over the top if you do!’ 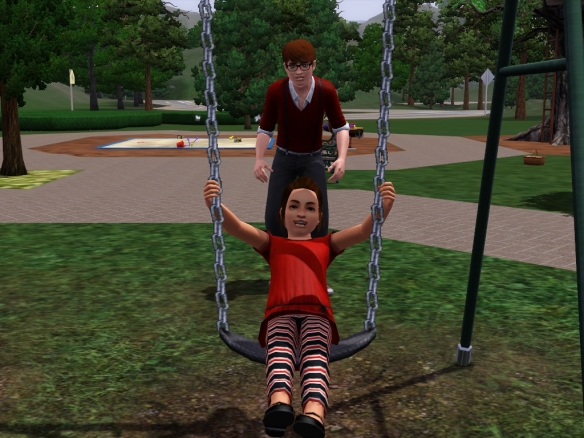 Tristan laughed as he pushed Robyn a little higher on the swings, carefully watching to make sure she was holding on tight. He’d finished work early so he’d gone to pick her up from school, taking her to the park on their way home. Robyn had no complaints!

‘Hold on tight, Robbie! We don’t want you falling off now, do we?’

‘Oh, that is so sweet!’ Tristan looked around to see a glamourous blonde woman he’d never seen before stood cooing next to him.

‘Can I help you?’ He asked politely, feeling a little awkward. 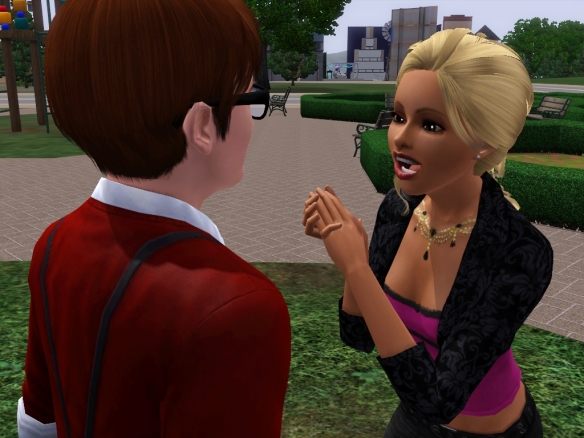 ‘Oh, I’m so sorry to interrupt! It’s just such a lovely sight, seeing a father push his daughter on the swings. Adorable! How old is she?’

Tristan laughed, pushing his glasses further up his nose. ‘She’s my niece, not my daughter! My sister and her husband are out of town, so I’m in charge. Robbie’s six!’

Annoyed at the lack of pushing, Robyn jumped off the swing. ‘Uncle T, I’m off into the tree house,’ she called grumpily, stomping off. She’d been enjoying herself on the swings. Tristan laughed as she walked away.

‘She’s a bit of a drama queen sometimes!’

‘I’ll say! I can identify to be honest, I’ve got a bit of a dramatic streak myself,’ smiled the woman. ‘So, the T stands for…?’

‘Tristan! Tristan Forest. And you are?’

‘Katya.’ Katya’s grin grew ever wider as she gazed into Tristan’s eyes. He felt himself getting hotter. ‘So, do you have any children of your own?’

‘Nope! I’m, er, I’m single at the moment,’ Tristan babbled. Katya’s smile was practically that of a Cheshire Cat by now.

‘What a coincidence! I am, too.’ She fell silent; Tristan felt as if her eyes were boring into him. He swallowed hard.

‘I’ve, er, I’ve never seen you around here before?’ He offered, adjusting his braces awkwardly. Katya laughed, a tinkling chiming that sent shivers down Tristan’s spine.

‘I actually live on the other side of town, but I was in the area for an audition.’

‘For an independent film. I’m an actress! Well, trying to be. Technically right now I’m a waitress at the diner.’ Katya’s smile became a little self conscious, and her confident mask slipped a little. Tristan noticed, and became a little more at ease.

‘You know, I’ve never met an actress before, even though I’ve lived here for a few years now!’ He smiled. Katya giggled, tucking a loose strand of hair behind her ear.

‘Well, you’re the only one! Although I guess I’m in the line of work where you meet quite a few,’ she joked.