‘Ivy, will you get out of the bathroom!’

‘I’m in the bath! This house has a million bathrooms, go use one of the others!’

Grumbling to himself, Ethan picked up his towel and slouched down the hall to the main bathroom, dragging his aching muscles. He’d recently had a treadmill installed in the bedroom he shared with his wife, fearing that he was losing his muscular frame as he aged. El Tigre were on a performing break while they composed some new material, and Ethan was fast realising just how much exercise he actually got racing around on stage three times a week! Not that it felt like exercise, mind you. Not like the half an hour he’d just spent on the treadmill, resulting in protesting limbs and an ungodly stench!

Throwing his towel over the radiator, Ethan pulled off his sweaty tshirt and ran a hand over his chest, contemplating shaving it. Looking closer, he was convinced he saw… No… A grey hair? And another one! He looked up at his reflection in horror. Suddenly his face was sagging before his very eyes, lines and wrinkles etched into every inch of his once-youthful skin.

‘Oh, gnomes! I’m so old!’ Peering closer, he began to experimentally prod and pull at his skin, trying to work out where the most damage had been done. Sighing, he stared miserably at his reflection. It was no use. He was done for, that it was. The rock-star-sex-god was gone. Finished. Kaput. Dissolved in a vat of wrinkles and grey hair, and he was powerless to stop it…

Scowling, he reached for his razor and turned on the tap, and was immediately engulfed in a torrent of water. 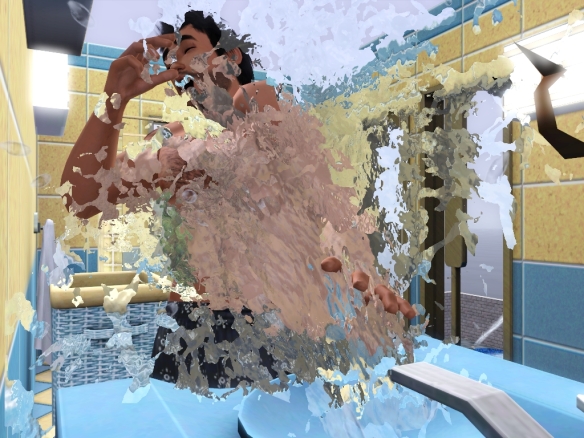 Coughing and spluttering, he groped for the tap, finally managing to turn it off again. Ethan stood breathless, drenched from head to foot.

‘Look, Puzzle! I made a Sand Puzzle!’

Dylan grinned and patted down the sand, smoothing out the finger marks he’d left in the head. Puzzle grinned and clapped his hands. ‘Great, Dylan! Clever Dylan!’

‘Your starfish is really good too!’ Dylan nodded enthusiastically at the small mound of sand Puzzle had scooped together, topped with a starfish shape. ‘What shall we make next?’

Dylan hadn’t even filled his first bucket of sand when a now-dry Ethan came storming through the back door. Concentrating on his sandy sculptures, Dylan didn’t sense his father’s mood.

‘Dad! Have you come out to play with me and Puzzle? Look! I made -‘

‘Dylan, I’d like a word with you.’ Ethan’s stern tone caught Dylan’s attention. Tentatively he stood up and walked over to his father, trying not to trail sand behind him.

‘Now then, son. I used the sink in the main bathroom upstairs earlier today. What do you think happened when I turned on the tap in the sink?’ 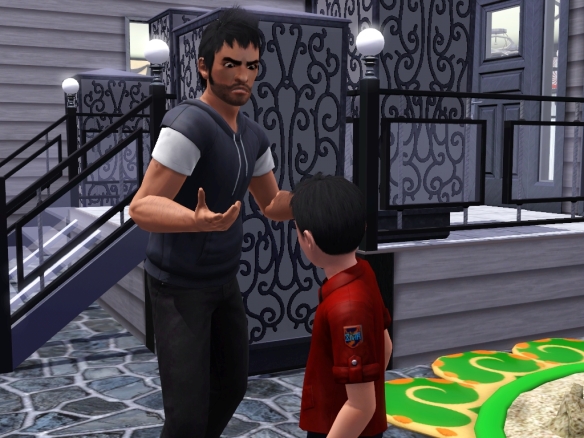 ‘You know full well what happened, Dylan! Water, spraying out everywhere, soaking the entire room! I have had it up to here with your pranks! The occasional whoopee cushion might be a bit of a laugh, but something seems to explode on a daily basis in this house!’

‘Would you stop denying it, Dylan! Who else would it be? Robyn? She’s a toddler, Dylan! She can hardly walk the length of her room, let alone booby trap a sink!’

‘I’ve had enough of this! Go to your room!’ Ethan stomped back inside into the kitchen to get a drink, muttering angrily to himself. Dylan watched him go sadly, before turning to Puzzle. 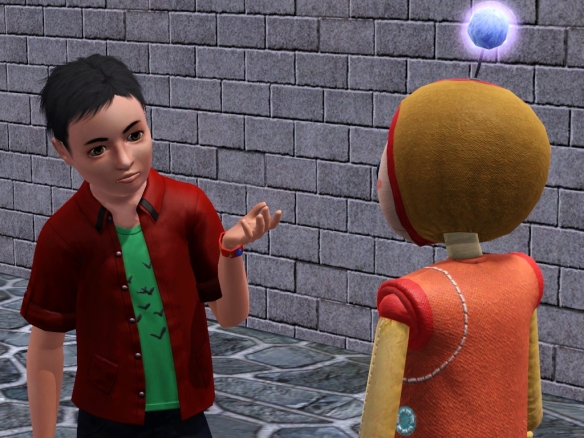 ‘Why, Puzzle? You know I’ll get in trouble for it. Please stop doing these things!’

Puzzle looked down at his feet. ‘Sorry, Dylan.’

‘Why d’ya do it, Puzz?’ Dylan was hurt. He loved Puzzle but this was the fourth time this month he’d been sent to his room as a result of one of his pranks, and they were only six days in!

The mischievous grin that was creeping onto Puzzle’s face began to infect Dylan, and soon the pair were giggling away.

‘Okay, maybe it was a bit funny!’ Dylan chuckling, envisioning the water drenching his father. ‘But please, Puzzle! No more!’

Carefully arranging all the tiny beds in one room, Robyn collected all of her dolls in her lap. It was time to put them all to bed, and they all liked to sleep in the same room in case they got lonely or there was a monster lurking somewhere. Together they could fight off the monster. First, she delicately placed Daisy-doll in the pink bed, her favourite, gently stroking her blonde plaits and singing a lullaby under her breath to help her fall asleep.

Now it was time for Ben-doll. Picking him up, she looked at his head. His painted-on hair was brown.

Robyn thought for a second, then lifted the doll to her mouth, popping the head into it. 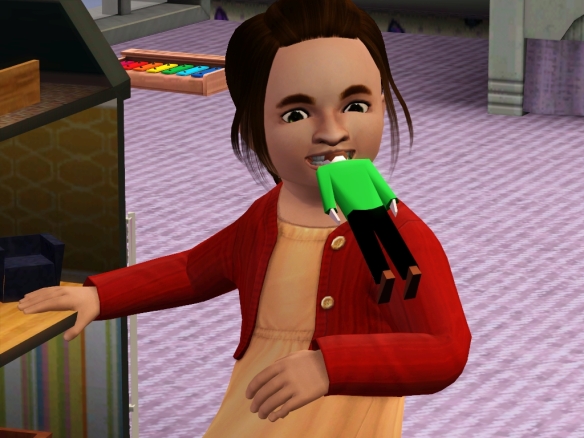 ‘Robbie! What are you doing?!’ Dylan, who had poked his head around his sister’s door, came racing in and pulled the doll from Robyn’s mouth. ‘Don’t eat that! Dolls aren’t food, you silly thing!’

‘That’s because he’s made of wood! Wood is icky!’ Dylan laughed at his sister. She wasn’t in any danger, trying to eat the dolls. They were too big to be a choking risk, with no small parts that could easily come loose. He didn’t think she’d try it again in a hurry anyway!

Robyn nodded again. ‘Fanks, Dylly!’ She wobbily got to her feet, and put her little arms around Dylan’s neck. 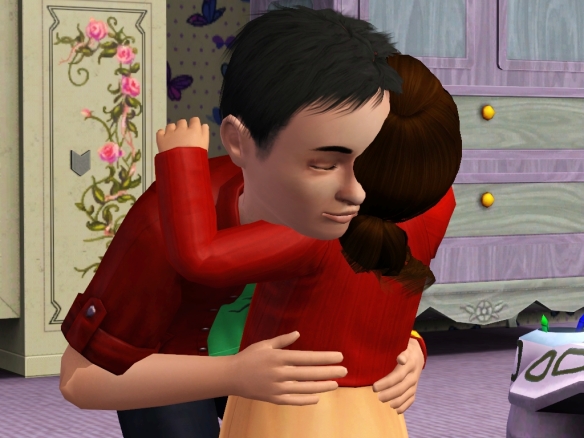 Dylan smiled, hugging his sister back. ‘That’s quite alright, Robyn! Now, are you hungry?’

‘Yep!’ Robyn fell back with a bump and looked cross. ‘Vewy hungee.’

‘One minute!’ Dylan pulled a box out from underneath Robyn’s crib, and took a bottle and a sachet of formula out from inside it. Within five minutes he was presenting his baby sister with a freshly made bottle, just as his Mum had taught him to.

Dylan turned to see Ethan stood in the doorway, a thunderous look on his face. ‘Robbie was hungry, Dad… I was just making her a bottle,’ he said falteringly.

Ethan’s face softened. ‘Well, thank you for that Dylan. That was very kind of you. But get to your room, like I asked you to do.’ He smiled at his son. He hated shouting at him, but he’d reached the end of his tether. So many pranks!

Going into his room, Dylan saw Puzzle sat in the middle spinning around on his computer chair. ‘Well, just you and me Puzzle. Again.’ Puzzle came to a halt facing Dylan, the antennae on his head whirring, and pushed the chair back under the desk.

‘So what do you want to do? We could play dress-up again…’

Puzzle tilted his head from side to side. ‘What Dylan want?’

‘Dunno.’ Dylan looked around his room. ‘I wanted to go for a swim. Can’t do that, though. You choose. I always choose.’

‘Don’t mind. Puzzle play with Dylan.’ Puzzle grinned and flipped upside down, trying to made Dylan laugh. A small smile crept onto the corners of his mouth.

‘Puzzle with Dylan. Puzzle don’t mind what we do.’ 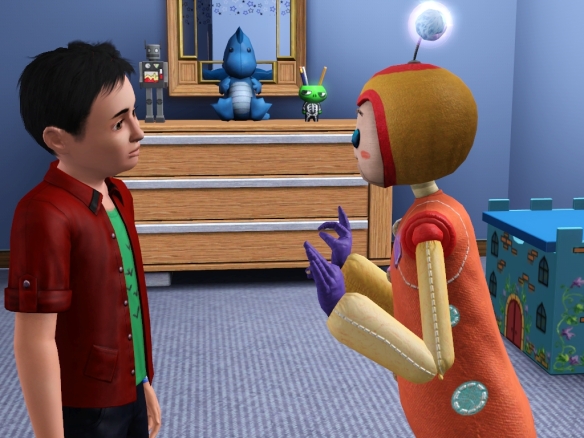 Dylan sighed, and mock-punched Puzzle on the arm. ‘All right! Fine. I’ll look in the toy chest. I hope Robyn’s not taken everything for her dolls house!’

‘And Audrey and her unicorns lived happily ever after! The end!’

Ethan smiled at his sleepy son as he closed the book. While the anger had still been simmering away he had been going to make him go to bed without his usual bedtime story, but having spent the afternoon pacing around the living room as Dylan played quietly in his room he hadn’t the heart. He’d taken his punishment well.

Dylan smiled at his Dad, resting his head down on the pillow. ‘Thanks Dad. Great story.’ 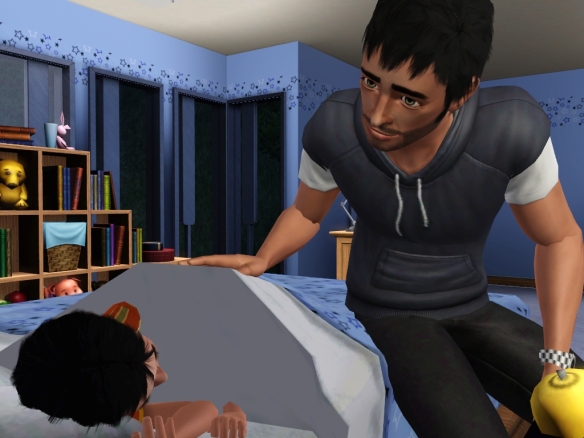 ‘That’s good to know, Dylan.’ Ethan rolled his eyes. Dylan definitely had not outgrown his attachment to that doll!

‘Dad… Don’t hate me…’ Dylan drifted off, pulling the duvet up around him. Ethan gently tucked him in.

‘I’ll never hate you, Dylan. Ever. Just stop pulling all these silly pranks!’