As promised, Kym had helped Cassie to get a job in the prison gardens. Each afternoon they would both be outside in the fresh air, weeding and watering as well as harvesting. Kym taught her young protege how to pull up weeds by the roots so that they wouldn’t grow back again, where to plant which vegetables, when they were ripe and ready to be picked. Cassie hadn’t known that the prison used fresh produce in its cooking, or that the prisoners themselves grew it! Out in the small enclosure she worked hard, relishing the extra time outside and the time away from Alicia, who she had barely seen since returning to the wing.

There was also the added bonus of being able to sneak the occasional few apples or grapes back into the cell, the illicit fruit tasting ten times sweeter than usual! Cassie had roared with laughter when Kym told her that her friends and she had once tried to make their own wine from the fruit she’d managed to smuggle back inside, only for it to explode all over her friends’ cell as they hadn’t used the right equipment. Ms. Sheeran had been put on clean up duty as the cell’s occupants had been put straight into solitary! Cassie didn’t need to think very hard to picture her disgruntled face.

It wasn’t just Kym that Cassie grew close to, either. She introduced her to her other friends on the wing, girls Cassie had seen but hadn’t wanted to speak to for fear of a backlash from Alicia. She didn’t think too highly of them.

Greta, a girl with short, brown hair with green highlights, was in for theft. She was a kleptomaniac, but rather than give her the medical help she needed the judge had decided to throw her in jail. She’d been caught stealing from her workplace, but hadn’t even realised she was even picking up the objects she’d placed in her bag. Imani was an illegal immigrant. Originally from Mosimbique, a man had persuaded her to pay him money to get her to Sunset Valley to work, assuring her that it was legal and above board and convincing her that she’d earn enough money to help her family. She’d only been working in a factory for a month before the authorities caught up with her.

Cassie was amazed at the stories these women were telling her. Before now she’d assumed that everyone in prison were bad, that they’d simply broken the law and were now being punished. She’d never stopped to think about the reasons behind their crimes.

Imani worked in the kitchens, and managed to get Cassie a job there helping with the cleaning three times a week, scrubbing the greased up ovens for hours at a time. While they worked, Cassie would listen to the stories Imani told stories of her family back home, of her younger brothers and sisters, her own three children, her parents and grandparents and aunts and uncles. It was clearly breaking her heart being so far away from them. Initially Cassie was a little jealous; as she no longer really had a family to call her own hearing tales of such a large, loving family unit made her more aware of her own loss. She realised that, actually, she and Imani had something in common, they were both separated from the ones they loved.

Just when Cassie was finally starting to enjoy, as much as she were able to, her time in prison, she was called once more to the governor’s office. Her heart dropped. Every time she had been into that room something terrible had happened. She’d discovered Matt had been sent away, that she would only be allowed to have Ivy for three months, that she was entering prison in the first place… Swallowing hard, she meekly followed Ms. Sheeran down to the offices at the front of the prison. To her surprise, the governor was smiling.

‘Cassie! Now then. Do I have some news for you!’

‘Far from it, my girl! I received a phone call this morning to say that James Brennan has finally woken from his coma! He’s nearly fully recovered now, and the police have started to question him. He’s backed up what you told the courts about your innocence in proceedings, so your appeal looks like it will be a success! Your court date is scheduled for a week on Monday.’

Cassie was taken aback. She’d not been expecting this at all! 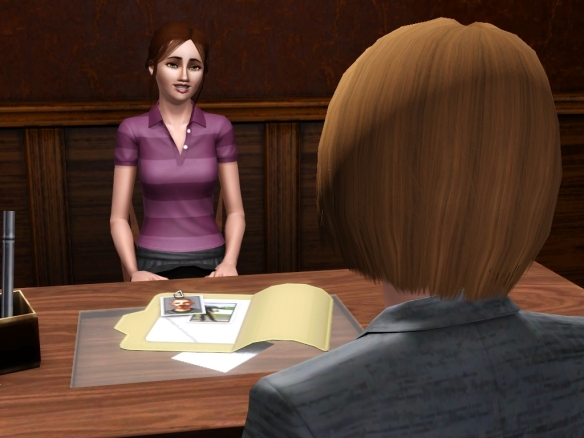 ‘You mean… There’s a good chance that, a week on Monday, I’ll be getting out?’

The governor beamed. ‘That’s exactly what I’m saying! Now, about Mr. Brennan. He’s been asking to see you. Now, usually we only sanction hospital visits for close relatives, but given the situation I’m going to make an exception. You’ll only be allowed half an hour with him. Are you interested?’

Cassie was shocked when she walked into the hospital room past the two policemen stood guarding the door. James was a shell of the man he used to be. He’d lost a lot of weight and muscle tone, and his hair was a mere stubble. He’d had to have his head shaved while he was in his coma so that machines measuring his brain activity could be attached to his head, it still hadn’t had chance to grow back yet. He looked… tired…

She wasn’t entirely sure how to react. This man had put her in jail. She perched on the edge of the cold, metal chair by his bed.

James didn’t make eye contact at first. He seemed shy, awkward, a far cry from the confident man she once knew. ‘I, er, I hear you’ve been in jail. They sentenced you.’

His eyes grew sad. ‘I’m so sorry, Cass. I never meant for you, or for anyone to get caught up in any of this.’

‘Then why did you let me deliver those papers? You knew full well what was in them!’

‘I know, I know!’ James looked pained; he rubbed his eyes frustratedly. ‘I just… I saw an opportunity, a chance to scatter the paper trail away from me. I never dreamed they’d actually do you for it if it all came out. It was just… It was something that I needed to do. For my parents.’

Cassie gazed down at her hands; she wasn’t sure if she wanted to know the answer to her next question.

‘Did… Did you ever have feelings for me? Or did you just see me as an easy way to deliver your dirty work around town?’

James looked up, staring directly into Cassie’s eyes. ‘Cassie, if you never believe another word I say, believe this. I definitely, definitely had feelings for you, Cassie Rivers. I was falling in love.’

‘Do you think he meant it, then?’ Kym asked absent mindedly as she focused on the intense game of foosball the four girls were battling with. Cassie had just returned from her visit to see James, and had been telling them about it.

‘I don’t know, really. It seemed like he did. Anyway, it’s all in the past now. I’ll be getting out soon!’

As her three friends congratulated Cassie, overjoyed that one of them would soon be leaving the grey walls of the prison, Alicia stood up from where she was sat nearby with Lexi and came tottering over on her wedges to the head of the foosball table.

‘Did I hear that correctly? Little Miss Innocent is getting out next week?’

‘Shut up Alicia,’ Greta said forcefully, taking her annoyance of her presence on the game. ‘We weren’t talking to you.’

‘Who says I’m talking to you, Butch? I’m just thinking allowed, that’s not forbidden, is it? Shall I tell you what else I’m thinking, too?’

‘Well, I’ll tell you anyway. I was thinking, what if I write to the judge about Little Miss Innocent’s escapades in here? How she seduced a screw and had his baby just to get him fired? Doubt she’d be going anywhere for a long time after that!’

Cassie snapped her head up, shocked. Before she could wonder if Alicia would really do such a thing, she was distracted by an exclamation from the other end of the table.

Kym had marched round and promptly slapped Alicia right across the face. Even Lexi, who’d just got up to see what the fuss was about, was shocked.

‘Now you listen here! If you so much as go near a pen during the next two weeks, I will cut your hair off and feed it to the llamas! The only reason you’re pissed off with Cassie is because you had your eyes set on Mr. Forest yourself, you can’t cope with the thought that a handsome prison officer might look at someone else other than you! Get over it! And get out of our sight.’

‘What… You… Oh… You pathetic little dyke! Come on Lexi, let’s go back to my cell. I’ve still got some ciggies left. Leave this lot to their game.’

Alicia strode off, pride damaged, without so much as a look back, with a disgruntled Lexi in tow. Once they were out of sight, the four girls cheered.

Cassie enveloped her friend in a huge hug as Imani and Greta continued laughing and chattering away to the watching bystanders about what had just happened.

‘Hey now, you should know by now! No-one pisses off my friends!’ Kym laughed. ‘Just… Do me a favour, Cass.’

‘When you get out of here, tell them what it’s really like in here. No-one knows, not really.’

Cassie’s eyes glistened. ‘Of course I will. I promise.’ 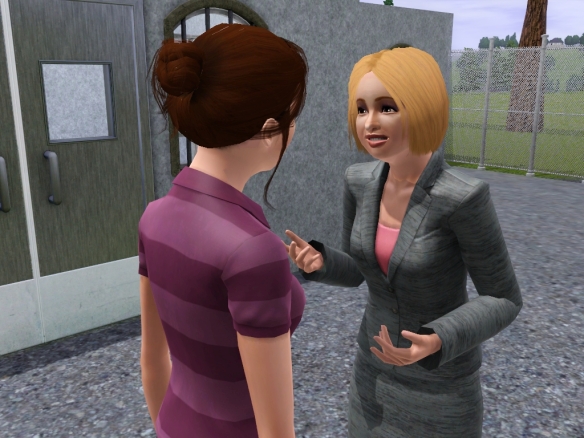 The governor walked Cassie out of the prison herself. She’d had to return briefly to sign out officially and collect her belongings, but as a free woman. She could walk right out of those gates, any time she wanted! She felt almost giddy with relief.

It was over. It was finally over!

‘I wish you the best of luck Cassie, I really do. And… I really am sorry, about your little girl. I do hope you can find her again.’

Cassie gave a half smile. ‘Thank you, governor. I hope so too. Well… Goodbye!’ 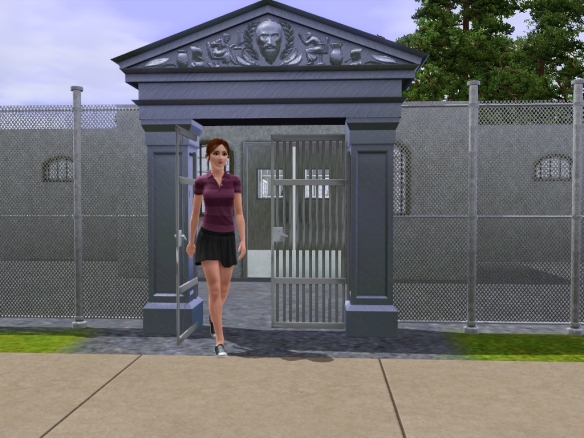 And with that, she strolled calmly out of the gates to freedom. Freedom! She wanted to whoop and cheer, and leap into the air in delight, but she was distracted. Someone was running up the road towards her, shouting…

A breathless Matthew came to a halt a few feet away from her, waving frantically. Her heart jumped for joy, and she ran the remaining distance towards him. He’d come for her! He really had!

Without thinking, she leapt into his waiting arms, hugging him close. 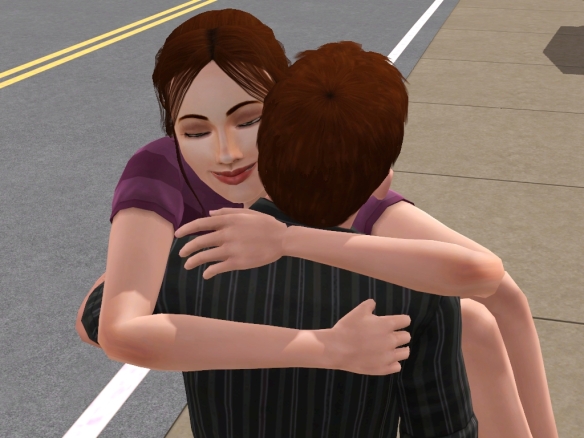 ‘I missed you,’ she whispered into his ear. It felt like such a long time she she had seen him.

‘I missed you too!’ He hugged her back, holding her tight. He carefully put her down and gently brushed the hair from her face, gazing lovingly into her eyes.

‘So… How d’ya fancy coming back to my place?’ Matt grinned. ‘Unless you’ve got any better offers, that is!’

Cassie laughed, hardly able to suppress her delight any longer. ‘Oh, I don’t know, have you been to Mrs. Appleby’s guest house yet?’ She teased, before pulling Matthew close and kissing him.