Cassie rolled her eyes. Trying to keep her temper as she carefully picked up the broken pieces of glass off the floor, she wondered how on earth the little girl had managed to hit her drink from such a distance; the glass had been placed on top of the dryer, a good five metres from where Maria was sat giggling away in her highchair and no longer in possession of her apple. Somehow she’d managed to bounce it back off the wall and hit the glass onto the floor!

‘For that, missy, you can sit there quietly until I’ve cleaned this mess up!’

Holding in her laughter as the little madam’s face dropped into a sulky pout as she accepted her punishment, Cassie pulled out the mop and began to clean away the puddle. And on her nice, freshly cleaned floor as well! She’d done this once already today. Deliberately taking her time and pretending to ignore the toddler’s mutterings of ‘wanna get outttttt Cassssiiiiiiieeeeeeee’, she smiled inwardly.

Chuckling, Cassie turned and picked up the mischievous little girl from her highchair. She was coming to the end of her trial period; she’d only been working for Eric Stanislav for three weeks yet she already doted on his adorable little girl, even if she was a class A nuisance when she set her mind to it!

The little girl smiled and nodded her head vigarously; they both knew that Eric would turn a blind eye to anything his precious daughter did. Cassie did wonder whether this was the right parenting tactic to use on Maria; the toddler wanted for absolutely nothing and usually got whatever she asked for, from a chocolate biscuit as he read her a bedtime story to a sandpit in the back garden. Still, she didn’t want to offend her new boss. For one she hadn’t definitely got the job yet, her appraisal was coming after she’d finished giving Maria her lunch. For another, he’d just been so kind to Cassie, rescuing her from Mrs. Appleby’s hideous guesthouse! She still remembered how the sight of the house had taken her breath away when she’d first seen it.

It was a stunning building, placed on the highest point of Sunset Valley with a panoramic view of the town itself, the beach and out to the ocean. The cherry trees planted either side of the mansion gently scented the air, and the sound of waves lapping lazily against the cliffs below aside it was perfectly silent, despite the other great houses it was nestled between. Cassie supposed it was possible to buy such an atmosphere when you were as unspeakably rich as those who lived up here were, and the plebeians like she simply had no clue that such a thing were feasible.

Even her room, which Eric had described on the phone as being ‘considerably smaller’ than the others in the house, was simply gargantuan compared to the grimy box she’d been renting from Mrs. Appleby. Heck, it even had an ensuite bathroom! Not to mention the small balcony overlooking the ocean view and the gardens at the back of the house. The other end of her bedroom looked out over the front balcony which was adjoined to Maria’s room, so Cassie could keep an eye on her charge if she were playing with the dolls house kept out there. There was no danger of the infant falling from the roof; Eric had hired the most adept renovators in order to ensure the house’s safety for his beloved child. Nothing was too good for Maria; if she wanted to play on the balcony then on the balcony she would play!

Holding her tightly in her arms, Cassie decided it was time for the pair to go and find her hopefully-now-full-time boss and find out whether she’d earned the position. The butterflies, which had been fluttering in her stomach since the previous evening, now felt like they were caught in a hurricane as she walked slowly to the sitting room where Mr. Stanislav was watching television. Seeing them enter the room, he switched it off and stood to greet them, smiling broadly. 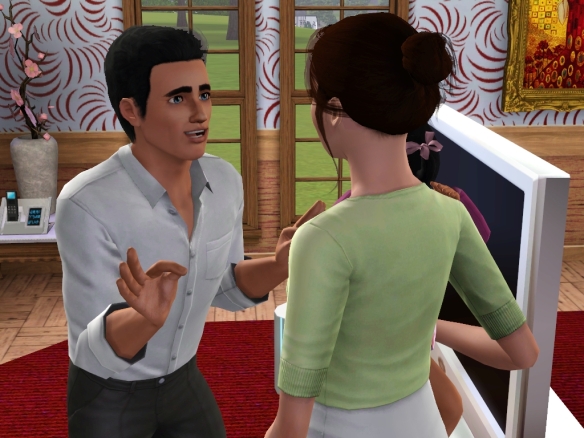 ‘Now then! Miss. Rivers. How has the morning treated you?’

Usually, those words would strike fear, or at least annoyance, into the hearts of your average parents, however Mr. Stanislav simply grinned and ruffled his angel’s hair. ‘What is it this time, my love?’

‘I knockeded Cassie’s drink on the fwoor in the kitchen. And, and I said dat she had cweaned it all up. But she hadn’t. She misseded a bit. But I wanted to get out of my chair, so I says dat she cweaned it all.’

Eric laughed and beamed down at his daughter’s serious face. ‘Is that all? Well, you’ve apologised for it now!’

‘So, Miss. Rivers! Before we were interrupted by this little terror, I had been going to ask you: how have you found the last few weeks? Any good?’

‘Good would be an understatement I think, Mr. Stanislav! I’ve loved my time here so far! You have such a beautiful house, and seeing as I have only the three of us to clean up after I don’t feel particularly overworked or overly stressed out, which means I have plenty of time to help Maria with her preschool studies, which are coming along nicely-‘

‘I readed a whole book to Cassie, Dada. A whole book.’

Maria narrowed her eyes and gave her father a stern look; she was being very serious and wanted her father to understand that she really did mean it, she really was clever enough to read a whole book to Cassie. Of course, Maria knew that she could tell her Dada that she’d flown on a pink elephant to Shang Simla and back and, as long as she gave him that look, he would believe her!

Eric looked thrilled at that news. ‘A whole book, Maria! Why, that’s excellent news! You didn’t much like reading with your last nanny, did you?’

‘And that’s why we’ve got Cassie here now, isn’t it sweetie?’ Eric tickled Maria under her chin affectionately. ‘You seem to be doing a good job, Miss. Rivers!’

Maria rolled her eyes impatiently. ‘Dada, I want Cassie to stay. Hurry up.’

‘Well, Miss. Rivers, it would appear that both my daughter and myself are very happy with your work here thus far! Would you be willing to take on the position full time?’

Resisting the urge to throw the baby in the air in delight and run about the house whooping, Cassie replied calmly, ‘it would be my pleasure to accept, Mr. Stanislav!’

Eric smiled, clearly relieved that he wouldn’t have to persuade her to help keep his daughter happy. ‘Excellent! I shall have your contract drawn up and ready for you to sign by the end of the week. I take it you’re happy to continue as you have started, living here in the spare room?’

Shuddering at the thought of returning to Mrs. Appleby’s house of coffins, Cassie nodded fervently. ‘More than happy to!’

‘Marvellous! I shall phone my lawyer right – oh!’ Eric’s phone burst into life in his hand, just as he was about to start dialling the number. ‘One moment, ladies,’ he smiled confidentially and strolled through to the study to take the call.

Cassie waited for him to leave the room before addressing Maria. ‘You hear that, Maria? I’m going to be your nanny now, properly!’

Maria nodded. ‘Yes. I said you would be. I told Dada.’

Cassie couldn’t help grinning at the child’s adult tone and serious face, wondering just how she’d react if he ever did say no to her, although she wasn’t sure she would want to witness those fireworks! ‘So, madam, what do you want to do this afternoon?’

The play park had recently opened on the far side of town, and for the moment was Maria’s favourite place to be. Cassie didn’t blame her; she’d spent much of time there with Maria resisting the urge to follow the children onto the swings and seesaws and up into the tree houses herself. Oh, how she wished she’d had somewhere like that to play as a child! How she wished she could be taking her own little brother there herself now…

‘Okay sweetie, but we’ll need to go and ask your Daddy for the car keys, won’t we?’

They entered the study just as Eric was finishing his phone call. 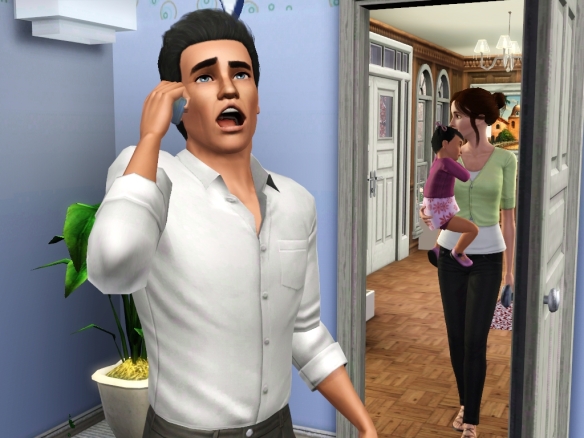 ‘Look, James, I’ve already said – I do understand, but you’ve left me in quite the predicament here! It was already arranged that you’d deliver it! Yes… Yes… Yes, I said…’

Clearly irate at the James on the other end of the line, Eric hung the phone up and swung round to face Cassie and Maria, oddly unsurprised to see them standing there looking perplexed.

‘Is everything alright, Mr. Stanislav?’

He sighed, not bothering to hide his annoyance. ‘Not really, Miss. Rivers, no.’

‘That was my business partner, James Brennan. He had been going to deliver some documents for me this afternoon, but he’s just rung and told me that he’s been held up in Twinbrook with some legal proceedings and he won’t be able to come and collect them. Bloody hell, my schedule for the day is going to be seriously disrupted if I have to take them myself!’

‘Where did they have to be delivered to?’

‘Central Park, he was going to be passing them onto another of our colleagues. Why do you ask?’ 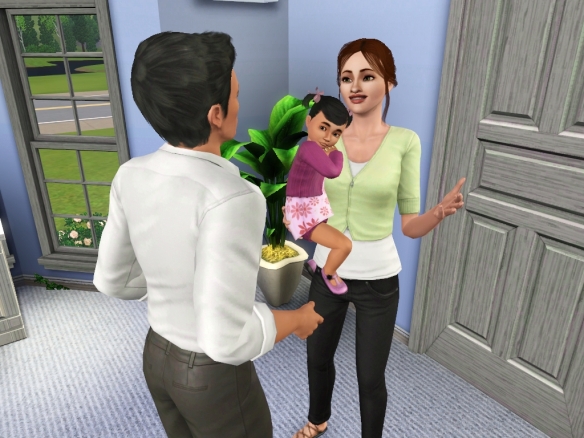 Cassie beamed; she was going to be able to help out her boss here!

‘Well, Mr. Stanislav, I had come in here to ask if I could borrow the car keys to take Maria to the play park across town. It wouldn’t be difficult for me to stop off on the way and drop these papers off in the town centre for you!’

Eric thought for a second. ‘You know, that is a very good idea Cassie. You would be saving me a lot of time and effort, there… Are you sure it would be no problem?’

‘Well then! That’s all sorted then. Thank you Cassie, you have no idea how much trouble you’re saving me from! Now, the man you’ll be meeting is named Guy Potter…’