Ignoring her aching feet, Cassie resisted the urge to lie down on the nearest bench and set off down into Sunset Valley itself. Everything seemed clearer, brighter compared to sleepy old Riverview, which was dull as anything with its ‘classic’ housing in muted shades of green and brown. The country girl literally laughed as she turned a corner to see a bright turquoise abode; if anyone had tried to paint their house that colour back home they’d have been run out of town for ‘ruining the wholesome image’ the aging community was so proud of. Madness. Pure madness. Who wouldn’t want to live in a world of colour?

Tearing her eyes away from the enchanting building, Cassie noticed a small pub further down the street. ‘The Blue Swan.’ Suddenly aware of her parched throat, she decided to blow a little of her meagre budget on her first legal drink. As she headed through the doors she remembered with a pang of sadness how she’d always planned this moment with Matthew. The day after the dance, well, technically today, they had talked about spending the morning job hunting before going to Riverview’s singular pub for lunch together. Cassie wondered if he was there right now, drowning his sorrows. She hoped he wasn’t, praying that he understood why she had done this and realised it was for the best, ignoring the little voice at the back of her head that was softly singing ‘you’re kidding yourself, you’re kidding yourself…’

Taking a seat at the bar, Cassie signalled to the red haired woman who was serving.

Cassie looked down into her purse and winced. ‘Erm, what’ve you got that’s cheap?’

The woman smiled. ‘Happy hour starts in five minutes, but you look dead on your feet so I’ll make an exception! Seems like you need this one. How about a Sweet Hijinks? Lurid cocktail, but it’s cheap anyway so it’ll be even moreso half price!’

Cassie returned the barmaid’s grin and thanked her, watching as she deftly poured ingredients into the shaker and combined them into a neon yellow concoction so bright Cassie thought she’d need to whip her shades out. Everything really was brighter in Sunset Valley!

‘So what’s your name, love? I’ve not seen you around these parts before, have I?’

‘Ah, a newbie!’ The barmaid’s face grew ever cheerier and offered a hand to shake. ‘Well, welcome to our humble town! The name’s Sue Scotch, I own this place with my husband.’

Shaking her hand, Cassie could barely suppress her own smile. Was everyone in Sunset Valley this friendly? Biting her lip, she decided to go out on a limb.

‘Nice to meet you, Sue! Say… I know it’s cheeky to ask, but I don’t suppose you’ve got any jobs going? Anything at all!’

Sue shook her head, and Cassie’s spirits fell a little. She knew it would be too good to be true. ‘Sorry love, not even glass collection at the minute I’m afraid. Honestly though, what are you like? Moving towns without a job and clearly barely a simoleon to your name!’

Cassie smiled wryly. Hearing it from someone else made it sound even worse. ‘You’ve just got to take a chance sometimes, I guess,’ she said, swirling the swizzle stick round in her drink.

‘Sue! Order up!’ A voice echoed through from the kitchen behind the bar and a plate of onion rings appeared on the serving hatch. Cassie eyed them hungrily. She’d not eaten since the previous evening, not thinking to do so on her walk.

‘Mr Andrews! Your rings are ready!’ Sue called over to the customer, although she noticed Cassie’s gaze.

‘Hold ’em there will you Sue, just playing darts! Can’t come away now or Burt’ll cheat!’

Sue thought for a moment. ‘Bill, do us another order of onion rings will you? I’ve knocked this one on the floor!’ She passed the plate over to Cassie with a wink. ‘On the house,’ she mouthed.

Cassie could hardly believe her luck; she wolfed down the greasy food whilst simultaneously thanking the amused barmaid, who ignored the calls of ‘dozy mare!’ that eminated from the kitchen, instead watching the young girl try not to choke on the food she was bolting down. 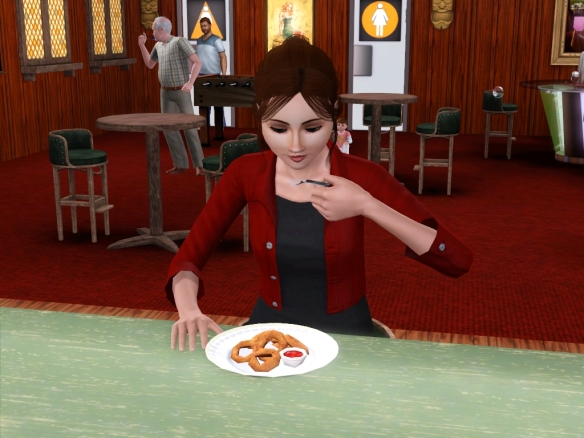 Cassie sat in the bar for the next couple of hours, nursing her cocktail and chatting idly with Sue whenever it was quiet and exchanging small talk with a couple of customers. She could have stayed there all night, but Cassie knew she’d end up spending more than she could afford to, and besides she needed to find somewhere to stay! She waved goodbye to Sue and called her thanks, but before she could turn to leave Sue had run around from behind the bar. 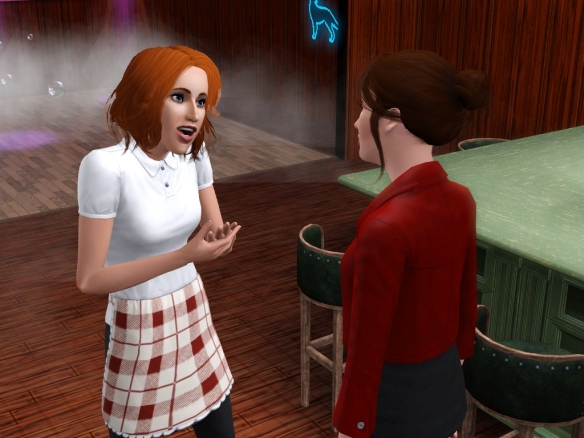 ‘Cassie, wait! Listen, I’m going to take a wild stab in the dark here and say that you have nowhere to stay tonight yet. Am I right?’

Cassie smiled sheepishly. ‘I’m just on my way to find a guesthouse or something.’

Reaching into the pocket of her apron, Sue pulled out a business card. ‘Here. Mrs. Appleby’s. She’s not too far from here so you don’t have to go across town, and she’s one of the cheapest around. Hardly the Ritz, mind, but it’ll be a roof over your head that’ll hardly touch your budget!’

Touched Cassie took the card, blown away by how kind this stranger had been to her. ‘Wow, thanks Sue! I really appreciate this. Is everyone in Sunset Valley as lovely as you?’

Laughing, Sue shook her head. ‘Definitely not, I’m afraid to say! One of a kind, me. Just make sure you drop by here in a couple of days and let me know how you’re getting on, okay?’

Agreeing, Cassie thanked her profusely once more before leaving to make her way to the guesthouse. It seemed nice enough from the outside, but upon entering Cassie was forced to take off the rose tinted spectacles she had been viewing the Valley with thus far. This was mainly due to the fact that all she could now see was roses, the hideously bright pattern glaring at her from all along the corridor walls, completely mismatched with the somewhat drab furniture, wooden floor, and the elderly Mrs. Appleby hobbling towards her with a crotchety expression on her face.

Cassie gulped. Maybe Sue was the only decent person in Sunset Valley!

‘Typical. Fifty simoleons a night, with a night in hand. I know what you young ‘uns are like, I’m not going to be ripped off by you chancers!’ 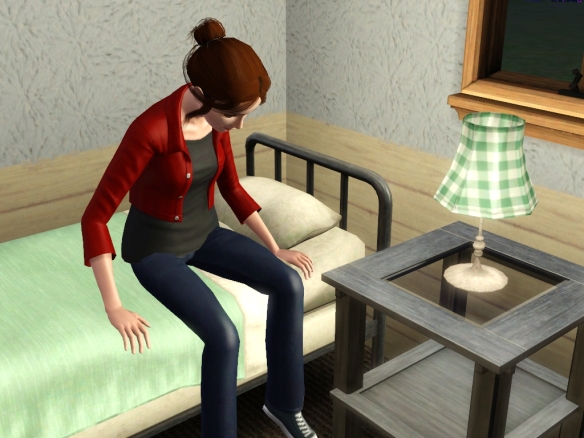 Cassie sunk wearily onto the lumpy mattress and tried not to look at the room’s decor. Plastered, greying walls, an iron cast bed, a small, grimy chest of drawers she supposed were meant to hold clothes, if you didn’t mind them growing elegant patchs of mould, and a beautiful view of a brick wall, although she could see a stretch of yellowing grass if she craned her neck uncomfortably. Sighing, she kicked off her shoes and stretched out on the bed, wondering how on earth she’d managed to stay awake for so long having not slept the previous night. Adrenaline, she supposed, or some caffeinated substance that helped to make up the Sweet Hijinks.

She missed Riverview. She missed settling down in Matthew’s comfy bed, a cheery ‘Good night, Cass!’ and her good night kiss. She missed knowing what she was going to be waking up to. She hadn’t banked on this uncertainty. In her naivety she’d thought that it would be an adventurous doddle, and until the walls of the tiny room had closed in on her it had been, breathing in the ocean air and drinking cocktails all afternoon. Now that the doubts of reality had started to creep in on her, the pure fact that she knew she had two weeks to sort herself out before she was living on the streets, she wasn’t so sure.

It was probably a good thing that she’d spent the previous night walking instead of sleeping, that she’d not fallen asleep on the nearest bench upon her arrival in Sunset Valley. Drifting off to sleep wasn’t a problem after all that. Even if her mattress was more like a rock than anything else.